BTC price plunges down to $20k price level. Here’s why.

The crypto ecosystem is facing another massive bearish cycle taking the whole market down. BTC price plunges down to the $20k price mark liquidating millions of dollars in trading positions.

Flagship currency is facing yet another bearish cycle with short-term holders facing losses in millions. We will explore why the asset price is facing such a situation once again. Let’s look at the current situation of the market. Let’s get going!!

The number 1 ranked crypto asset is going through another bearish cycle and has lost more than 3% over the past day. This nosedive of the asset is taking it close to its psychological support at around $20k. Despite this loss, the gains of the BTC are more than 7% over the last seven days. Data from CoinMarketCap reveals that the daily trading volume of the asset has lost more than 20% over the last 24 hours. It appears that short-term holders are speculating and trying to find the best trading entry possible. 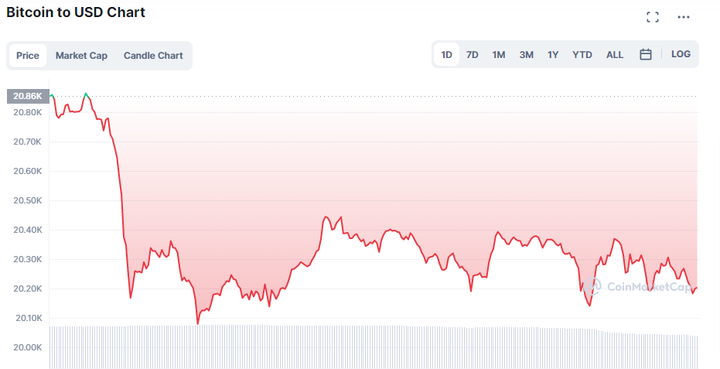 In the previous week, BTC's price made contact with the bottom extremities of the consolidation zone. At the peak of $24,500, Glassnode valued the quantity of coins kept as an unrealized profit, later changed to an unrealized loss.

Let’s explore the fundamental side of the asset to further analyze why we have reached this situation and whether or not it can get better.

Following the terrible inflation news that was announced on September 13th, Bitcoin [BTC] experienced yet another significant decline. At some point, the devastating Consumer Price Index (CPI) news caused BTC's price to drop by almost 10%. The most recent data shows that BTC was trading at $20,300 after overnight losses to important supports. The data analytics company Santiment recently tweeted that Bitcoin dropped concurrently with the S&P 500, which had its largest decline in two years.

The update also quickly agreed that "the correlation between the sectors is significant, and typically, crypto grows best with minimal equity reliance." 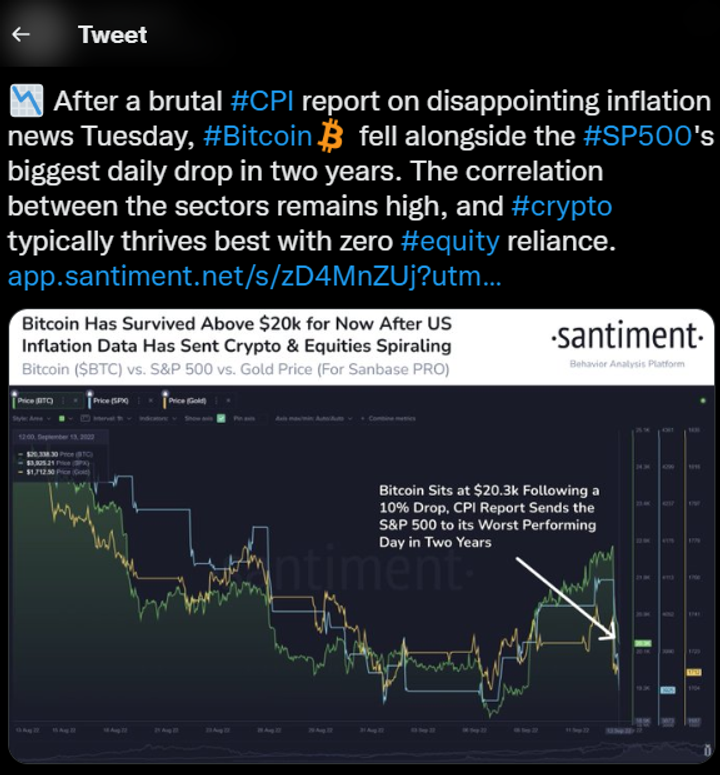 The Market Value Realized Value (MVRV) ratio was another significant indicator of rising FUD. The next Glassnode update saw a decrease in the MVRV ratio (1d MA) below one. It is still hovering around 0.997 at the time of writing. It is anticipated that the situation will continue to deteriorate before improving. The most recent decline just indicates that short-term investors have bigger losses in their Bitcoin holdings. 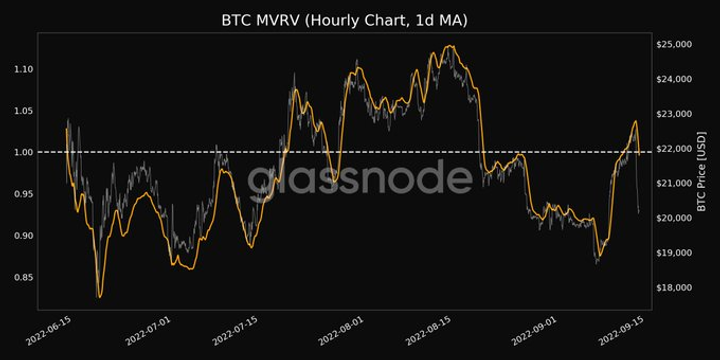 However, BTC was exhibiting a strong upward trend shortly prior to the crash. The increasing BTC holdings within shark and whale addresses since the start of the bear market are evidence of this. In this regard, Santiment claimed that since mid-February, the number of Bitcoin addresses holding 10 or more BTC had grown "dramatically." In fact, since February, the number of these addresses on the network has increased by 3.6%, reaching the highest level in 19 months. 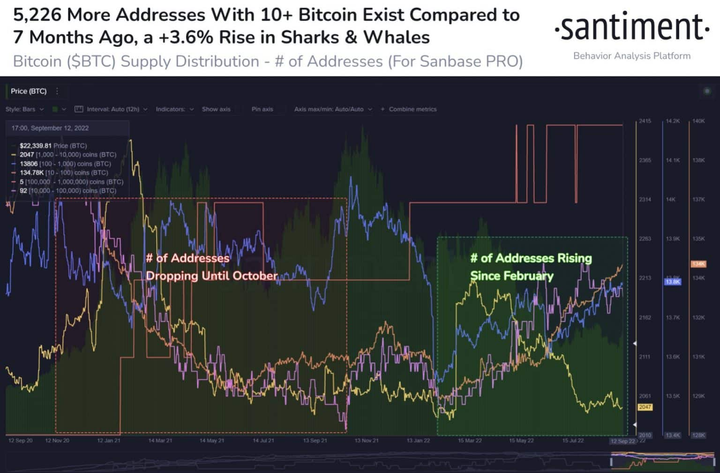 Let’s look at the technical side of the story to understand how things got ugly for the asset.

What’s Next For BTC?

In my opinion, Bitcoin will remain on the horizon channel till next Monday. Then the 20 and 50 EMA will be crossed, which will give the RSI a strong push to break the 50 levels. If this month ends above $25,000 as I anticipate, we will see $44,000 in November. This prediction will materialize, in my opinion, when BTC stabilizes near the bottom of the horizon channel and holds. A lower break would be extremely negative, and I do not anticipate this happening. Another federal interest rate increase on September 21 would also be risky.

BTC appears to have collected its profits and is currently heading downward for a while before resuming its upward trend. negative until $18900. BTC will resume its ascent to bull-resistant levels at $21200 and then reach $23000 once more. If it can rise above $23000, it may reach a new high.

The short-term sentiment around crypto will undoubtedly continue to be depressed by inflation levels. At this point, Bitcoin needs to "gather itself" and keep its present levels. Not financial advice. DYOR!!