DeFi TVL plunged more than 10% over August. A recent report from the DappRadar has revealed how Ethereum is leading the losers. With its current losses, DeFi TVL has fallen to the $58 billion level. 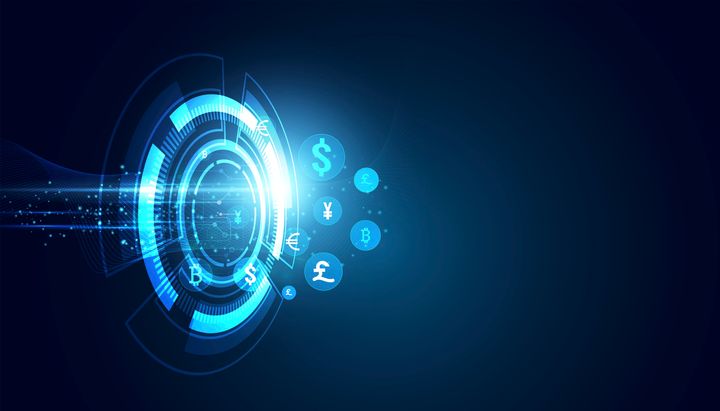 In recent months, it appeared as though one piece of bad news had taken over the cryptocurrency market in succession. Several breaches occurred in August, including the Solana wallet attack and the Acala and Nomad adventures, as well as the Tornado Cash sanctions, which had a big impact on DeFi TVL (see below).

However, August also included some encouraging news, as the Ethereum network finished one in advance of the forthcoming Merge, using one of the largest test networks, Goerli.

The bear market's consequences are undeniably still present, and dapp activity is steadily decreasing month by month, with 1.67 million being the lowest daily unique active wallets at the moment (UAW) tied to blockchain-based applications that were registered all year.

In a recent analysis, DappRadar discovered that in August, the total value locked (TVL) across the decentralized financial ecosystem (DeFi) decreased by 10.47%. The current TVL total was $58.4 billion. Data from DefiLlama show that DeFi TVL was valued at $250 billion less than eight months ago. Total TVL is only $58.4 billion today, the same amount it was in April 2021 when the DeFi ecosystem first started to take off. Additionally, compared to 2021, the overall DeFi TVL has decreased by 55%.

In August, the market suffered a loss of nearly $8.7 billion due to the decline in the DeFi TVL. DappRadar claims that the Office of Foreign Assets Control (OFAC) notification on August 8 prohibiting the use of Tornado Cash by U.S. citizens is what caused this decline. 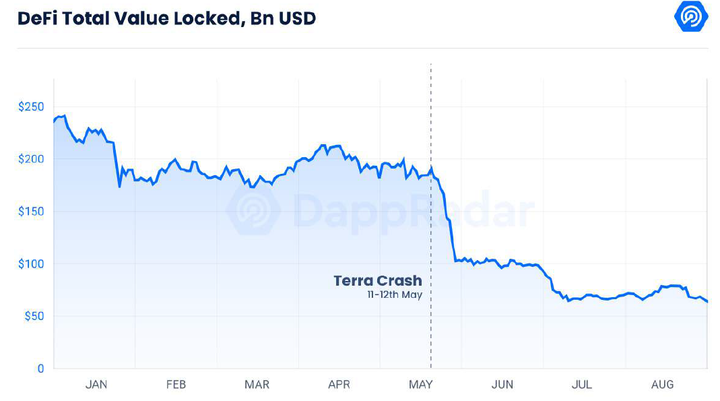 The rise and fall of the total TVL fall

Analysis of the Industry Unique Active Wallets reveals that DeFi is recovering, but the overall DeFi TVL is continuing in trouble and is currently at $74.21 billion, a worrying decline given that this is $250 billion less than it was eight months earlier. The TVL last fell to this level in April 2021, just as the pace started to pick up steam. According to this, since August 2021, the DeFi TVL decline has been at least 56%. Due to the Tornado Cash problem and the TVL, the market has had an especially challenging month, losing nearly $8.7 billion as a result of a monthly decline of 10.47%.

Ethereum Was Most Affected

The network, which houses projects under the Ethereum [ETH] name, has a total TVL of $34.69 billion, accounting for 68% of the market. DappRadar, however, reports that the network's market share fell by 11% in August and has decreased by 56.63% over the past year.

In the previous month, decreases were also seen in the leading DeFi protocols on Ethereum, MakerDAO, Lido Finance, and Uniswap. MAakerDAO's TVL was $8.37 billion at the time of publication, down nearly 25% since August 2021 and 6% in August. It's interesting that TVL on Lido Finance fell 7% in August despite the impending Merge and spearheading the charge for liquid staking of Ethereum. Furthermore, as of the time of writing, Uniswap's TVL was $5.58 billion. In August, it dropped 12%. 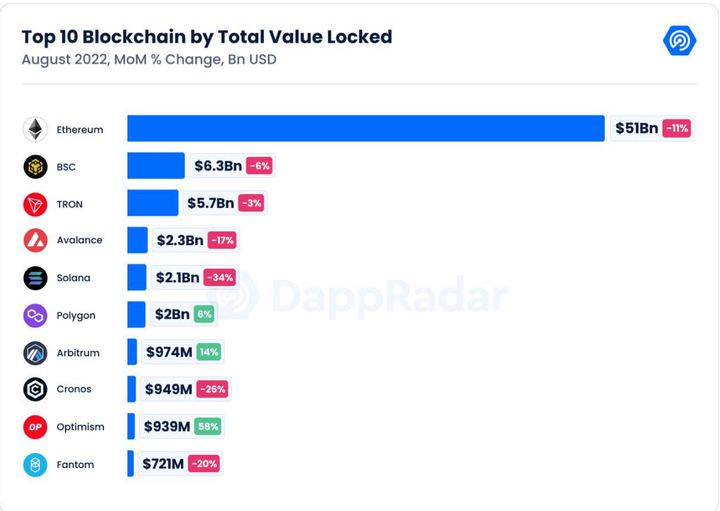 Further research by DappRadar revealed that the TVL of protocols built on the BNB Chain fell by 6.44% in August and by 75.67% overall since August 2021. Solana [SOL] was attacked at the beginning of the month and saw a 27% decrease in TVL over the first four days.

DappRadar discovered that it subsequently went on to decline by 6% for the remainder of the month and is currently valued at $2.11 billion, a loss of roughly $1 billion. In addition, despite an increase of nearly 68% over the previous year, Tron Network's TVL fell by 2.90% in August. Avalanche's TVL has also increased by about 11% since August, despite the fact that its TVL decreased by 17.20% that month.